Recasting the Role of the Arts in African Academia: Part II 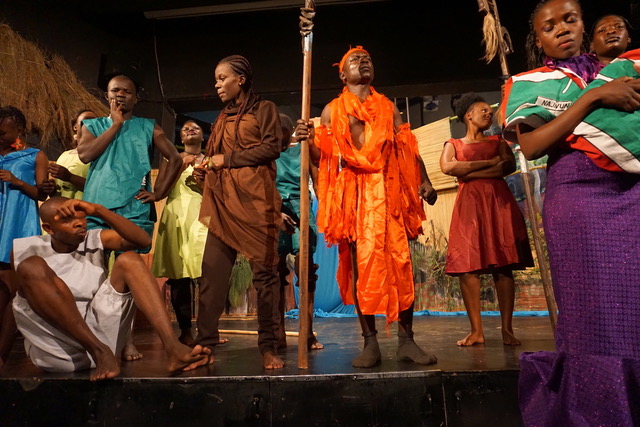 This feature is the second in an instalment of two articles highlighting Next Generation Social Sciences in Africa fellows working at the intersection of the social sciences and the performing arts. They discuss interdisciplinarity and the ways in which the methodologies of theater can help provide insight into social phenomena.

“At the core, I’m a storyteller,” says Pedzisai Maedza, a Next Generation Social Sciences in Africa fellow and graduate student at the University of Cape Town. “I grew up in a storytelling tradition. I study the kind of stories we tell ourselves—and the kind of stories we don’t tell ourselves. What we don’t say is just as informative as what we do say,” Maedza states.

One such story that is hardly ever told is that of the Namibian Genocide, which occurred between 1904 and 1908. Although the atrocities resulted in the murder of 80% of the Herero people and 50% of the Nama people, the events remain absent from most mainstream narratives, procuring their title as the “forgotten genocide.” These atrocities are the primary object of Maedza’s research.

“My work is basically interdisciplinary—at the intersection of performance studies, genocide studies, and memory studies.” In his Ph.D. dissertation, he “thinks through how this genocide is remembered and how the memory is passed on through time, space and generations.”

For Maedza, performance is a uniquely powerful mode of conveying memory, not only in terms of drama and theater, but also in the mundane, ritualistic performances we carry out in our daily lives. “Performance can be used to pass on particular memories across time,” Maedza says. “If you go to literature, the genocide is largely forgotten. But if you go to the cultural performances of the people, then you begin to see how this genocide is remembered—how memory is shaped and passed to new generations through stories, through song, through cultural festivals, and through particular dress customs.”

One such cultural festival, which features prominently in Maedza’s research, is the Herero ceremony known as Red Flag Day. Every August since 1923, the Herero people have gathered in the city of Okahandja for a procession to the city’s cemetery, commemorating the 1923 burial of Chief Samuel Maharero. “I try to think how people live through experience, and how they show their particular understanding of who they are,” Maedza says. “As a people, they have been displaced from this particular town. But every year in August, they come together for one weekend and they occupy this city.”

“It’s a kind of reclamation of space,” he explains, “to link themselves to the same pathway that, for a hundred years, their ancestors have walked.”

As Maedza explains, using either a performance or social scientific approach alone does not allow for the richness of analysis achieved by crossing disciplines and using both methodologies in tandem. “I’m uncomfortable with disciplinary boundaries,” Maedza says, “and I try to find ways to marry the disciplines. Sometimes we get too caught up with conventions, but conventions are only useful insofar as they help us understand phenomena.”

A testament to his penchant for interdisciplinarity, Maedza has found—through his study of the Namibian Genocide, and the cultural performances used to memorialize it— that the union between social sciences and performance in his dissertation has opened doors to understanding the social phenomenon of memory. “Memory is hard to describe in words,” he says. “But when you draw from the social sciences, you can begin to find methodologies that help you understand phenomenon beyond that which you can understand with just a performance perspective. You begin to engage with life as a text—with visual, written, and performance texts.”

“I like to think of performance as a keyhole through which you can peek to understand the past—to understand how people imagine themselves in the present and in the future,” he says.

Time is one of the main factors in Maedza’s study. The memory of an atrocity, he explains, will decrease as time and geographical distance increase. Memory is also, however, transmitted from past to present and preserved through performance. In the case of the Namibian Genocide and similar trauma, however, such memory also comes imbued with pain.

“Although this event happened close to 100 years ago now, when you engage with ideas of post-memory, children still experience pain through their parents’ narrative,” Maedza states. “Pain is not just a thing that an individual experiences. Pain is political. Pain is social. Pain defines a people. Injuries, as they say, leave scars but kisses leave no trace. So if a people experience trauma, how do they then contain this experience and make sense of it? There you find the kind of performances I’m interested in.”

Maedza, whose Aunt was kidnapped from their home in Southern Zimbabwe by Mozambican soldiers, and whose parents passed away when he was eight and fourteen years old, respectively, is both personally and academically experienced with the subject matter at hand. “You could say the village raised me,” he said of the mining town of Masvingo, where he lived until moving to Harare to study Theater Arts in 2006. But, just as performance can convey pain, it can also provide healing.

Similarly to Henry Obi Ajumeze, Maedza believes that theater provides a space to both explore conflict and engage with its resolution. “Performance establishes a safe space where people can begin to talk,” he says. “You almost create a frame where it’s okay to say: ‘I’m mad at you.’”

This is important, Maedza implores, in a world where people are quick to emphasize differences with one another, but less disposed to listen. “At a societal level, how do you get people to engage again in meaningful dialogue?,” he asks. “How do you create a space for people to engage with feelings of hate, feelings of guilt? How do you begin to process this?”

“That,” Maedza concluded, “is the value I draw from performance.”